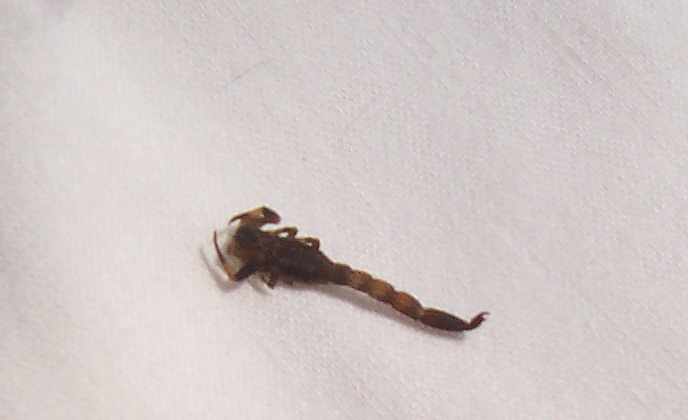 They may be small – but they are powerful!

A sting from one of our scorpions in the Nhamacoa is a rather agonizing event. Fortunately, they aren’t too poisonous but the fiery dart of pain in whatever part of your body they sting makes you shout and isn’t something you get over quickly. I know this, having been stung several times and still alive to tell the tale.

One evening, on my birthday as it happened, I stood up in the bath and prepared to dry myself off. Giving my towel a vigorous shake – I always do this to dislodge a lurking scorpion or other bug – I then gave my neck a pat with it. The next thing, a fiery, painful dart in the neck and then on the chest as well! The wretched little scorpion lurking in my towel hadn’t fallen off with the vigorous shaking but instead had stung me twice! Then, it fell into the bathwater and looked as if it was determinedly swimming towards me for another attack. Panicking, I crashed around in the bath to avoid it and almost fell over. Hearing my screams, O’D rushed to the rescue. “Kill it! Kill it!” I cried, out for revenge.

In bed that night, I lay on my back while the poison spread, giving me a sensation that thousands of little feet were walking prickily around my neck and chest. I swelled up and the swelling was sore. But couple of days later, it was all over and I was back to normal.

Allan Schwarz, who used to be a professor at M.I.T and who has grown over one million indigenous trees in Mozambique has also had some alarming encounters with scorpions.

Allan has lived in a tent in his own little forest near Beira for over 20 years and on one particular occasion the sting was more serious than usual as he was stung on the throat. His throat swelled up so much that he began to have difficulty breathing and thought that he would be forced to give himself a tracheotomy! Luckily, he managed to survive without the do-it-yourself little operation.

Although the scorpions we find in our house and on the verandah are small, the scorpions that live in our forests, under fallen trees and logs, look more like monster scorpions. They are black, about 2 to 3 inches long and quite terrifying.